Or perhaps not. When you shoot in JPG format, you might be done indeed, as the camera will process the photo for you. In RAW format this does not happen and you're on your own. I do like post processing, so shoot almost always in RAW format.
In this post I would like to go over a photo that I did process to show what I did and tell why I did that. It will be specific to Lightroom, because that is the tool I use. 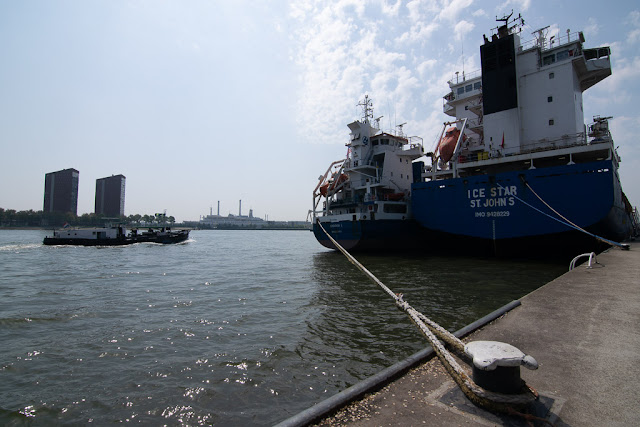 This is the original photo. My eyes were caught by the rope holding the ship moored and how it would make a nice leading line. I also found the photo had some kind of geometry in it. The water and air would divide it in half vertically. Then the clouds in the air plus the two ships would occupy the right half of the photo. While the left half would have no clouds and the two buildings. The ship that came into the photo from the left was not planned for, but it added a feeling of movement to the static picture. 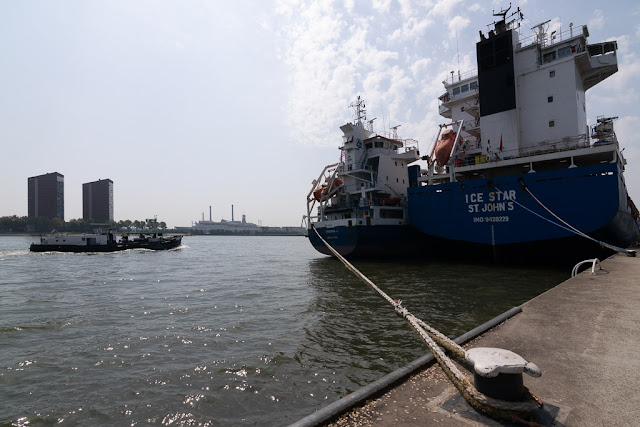 My first action was to straighten the buildings on the left, using a guided upright perspective in Lightroom. I felt that buildings should not look like they fall over. The original photo also had a cool tone, which changed to much warmer when I changed the white balance.
I always start with these things. Cropping and straightening the photo and then the white balance. These two can have a huge impact on the overall mood of the photo. I did not really crop here, but the straightening did modify the photo a bit, so there are some parts cropped away. 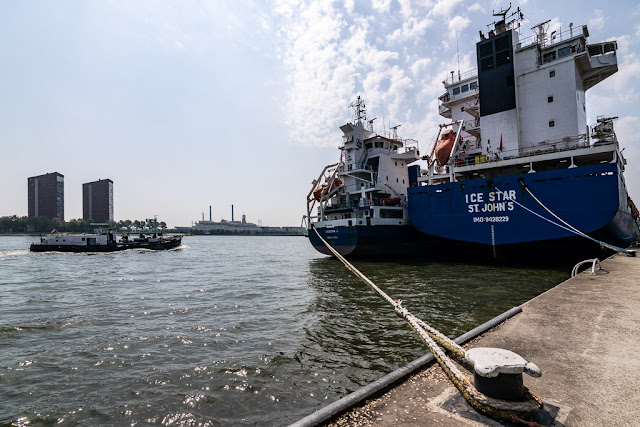 My second step is a global adjustment. here I would definitely want to open up the shadows more. I ended up with a +54 on that slider. As I also wanted to add a lot more punch to the photo, I raised clarity to +48. The photo was quite light and although not foggy, it had a little of that same feeling of being smoothed out. So I actually used the dehaze slider to get it a bit darker and more contrast in (mostly) the sky You can read about dehaze on The Lightroom Queen's forum. 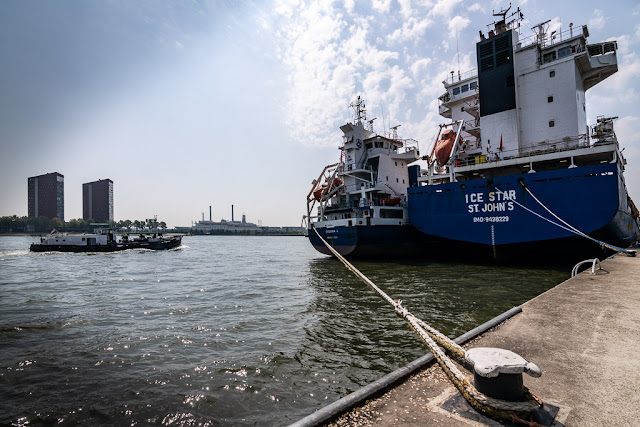 I mostly want to emphasize the two moored ships and therefore thought of darkening the left side of the photo. Because of the ship that sailed in from the left, I thought of making it like coming from the dark to the light. So I added a radial filter that would lower exposure a lot. As I only wanted that effect on the left, I used the brush to remove the right side of the photo from the filter. The left corners being as dark as they are now, gave me the feeling of "opening up" for the ship on the left. Here you do not need to look very well to immediately see this photo is processed, as there is little chance of finding this in reality. But to me a photo does not need to be 100% real. In that case I should have kept the original raw photo. However, be aware that others might not like over edited photos and this one is pretty obvious now. 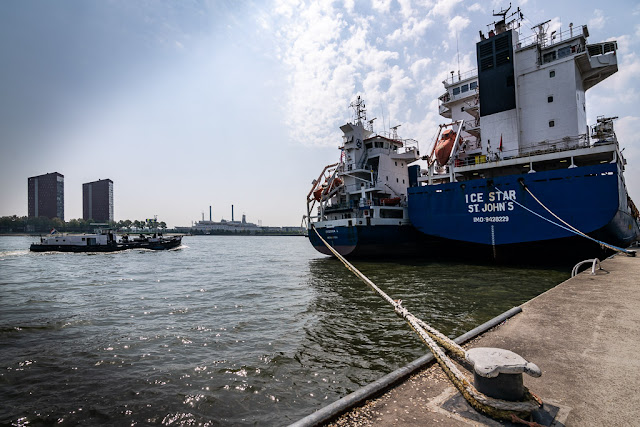 While I am happy with the quay being on the photo, as it holds the base of my leading line (the rope), I do not want it to hold attention for long. So I dimmed it a little, by using a gradient filter that just covers the quay. Here I lowered exposure (-0.35), whites (-24) and mostly highlights (-78). The part holding the rope is very dark, so I opened the shadows in it (+54).
I do not think these settings are too obviously noticeable, unless you have the before and after next to each other. Still, they do improve to what I would like to get. 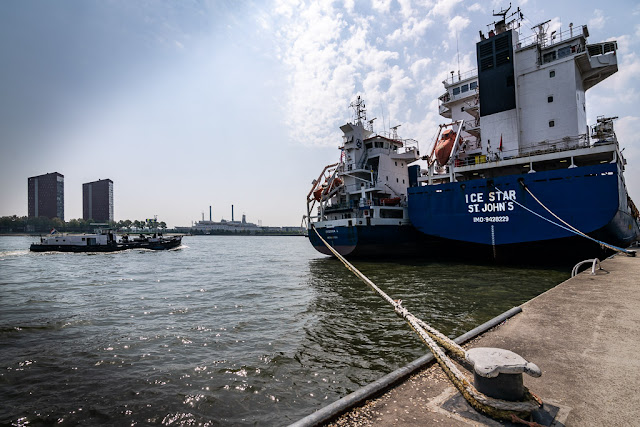 To me, the white text on the back of the right ship was an eye catcher. This had to stand out a bit more. For this I added a new radial filter, around the text. Here I mostly raised whites (+63) and highlights (+22) to have the text stand out more. I also added clarity and sharpness here.
Like the previous adjustment, I think it is step that one will not immediately see, but it definitely contributes a lot. The text stands out better and is more of a point to attract attention now.
If you look at the image, you can see that in the previous step the text was a bit toned down, like the white of the bridge on the ship. It now jumps out, so for the careful watcher you can surely see that has been edited.

My final step was a slight alteration to the air. Here I used a gradual filter where I lowered the temperature (-15). This gives a more blue tint to the air. Using the brush I made sure the ships were not altered by this filter.
Like the previous adjustment, I think this one is not attracting much attention. Unless looking at the top of the sky, I think the effect is very minor. But it changes the sky to less gray, for which I am happy.

Looking at the result, it surely changed a lot from the original one. The leading line and radial filter that darkens the left corners do immediately pull the eyes towards the center of the photo. The ship on the left and the buildings there do give a bit of context, but do not divert attention. From the center the eyes go to the right, where the ships - the topic of the photo - are moored. The text on the back of the right ship keeps attention for a bit due to how it jumps out. From there the eyes can look around at the ships, go to the quay and finally one would look around and glance more at the buildings and the sailing ship.

The photo is much to my liking, the edits make my eyes go as I described above. Of course, I cannot say how others look and whether they will perceive things as I do.  But to me that is less important. Of course, I hope others like my photo and feel I made good edits. Yet, given that I do this for fun, I mostly strive for photos and edits that please me. Which I think should be the case for all us beginning photographers.
Do the things you like, make photos that please you. And then enjoy your hobby.
Posted by Andre Speelmans at 8:08 AM No comments: