How can you ruin a shot?

As you are doing things, you get better at it. At least in general. Of course you sometimes need to push yourself to try and not just repeat what you know. This qualifies for photography as well as for any other thing in life. The problem is that this improvement goes slowly and gradually. You do not wake up and went from making lousy shots to winning a Pulitzer. I was thinking I did not make much progress, until I looked back at the early photos I made from when I started looking in photography. Which is about three years ago for me. And I picked out one of the very first photos I did post process.

I shot the photo on the left on the airport, going on holiday, with my brand new Nikon D3200. My first DSLR, my first experience with things like aperture, ISO, and I barely had a clue what I was doing.
The photo will not win any award, but you might call it okay. You would be fooled, as I probably made every mistake you can. This is the result after post processing it yesterday. The original photo is, being RAW format, much flatter and has some glaring issues. Flatness is, of course, fixed in post. Or at least that is what I thought when I did this three years ago. Looking back that turns out to be an exercise of making a bad photo worse.

Why am I sharing this?

To perhaps have some new photographer realise these things, before making the mistakes. To share that this is the learning curve many go through. For me important: to notice I have developed. I can see some of my mistakes, I can see what things to avoid. So, in short: to boost my own feelings. I will of course celbrate this fact with a lot of alcohol and good food. After finishing this post. 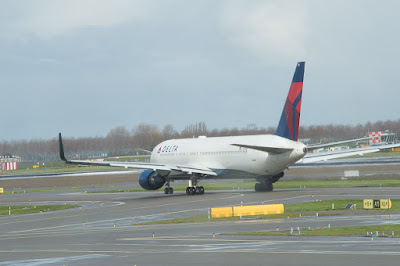 As already said, the image was saved as RAW, so flat. Nothing with that, but now look at my settings:
ISO: 1250
Aperture: f/22
Shutter speed: 1/400
Focal length: 220mm
The first thing I would question is: f/22? Really? Why? You can see the noise in the original clearly. Obvious as it has an ISO of 1250, at which the D3200 with the 55-300 kit lens definitely is showing noise.
The aperture should be wider, as there is only the airplane of real interest. Nothing besides that thing needs to be really sharp. And that could have lowered the ISO significantly. The shutter speed could otherwise have been lowered a bit as well. The airplane was going very slowly, so even with a high f-stop, ISO could have been reduced. The mode of shooting was aperture priority, so - looking back - it would have been so obvious to dial that down and get much less noise.
As for composition: it's an airport, so hard to get really clear shots, but perhaps making a bit more space on the left side, so the airplane would have some space in the direction it is going, would not have been a bad idea. I cannot say for certain, as I really do not remember how it exactly looked. It was three years ago after all and my memory is already not so good.

What did I learn?

The most important thing is that I actually know way better what the controls on my camera are and what they do. I had a good camera on my holiday, many shots are totally unusable as they are over- or underexposed. Caused by not knowing what the controls do.
This is tightly coupled with understanding the exposure triangle. That's not really hard, but if you only think you know it, you are making things harder for yourself. While it is easy to already know when to user shutter speed priority or aperture priority mode. Just this knowledge and switching at the right times makes a huge difference. There is more, but these two things are such vital parts. Neither of them has you make great photos, they are merely "technical". But they will certainly help you to at least get decent photos. I learned (a lot) more, but think that these two are the first and most important steps to take as a new photographer. 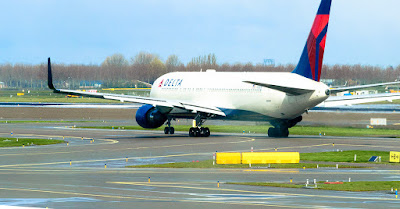 Then, after the holiday, you come home. Start with the great new tools, mainly Lightroom. I can assure you that Lightroom is a very, very powerful tool and I love it. But it does help to have a clue what you are doing. What was I thinking when I made this edit? It's horrible! And I know I actually liked it. Yes, I am not lying, I liked it. The main reason? The colors popped. And yes, they do. And yes, I still like popping colors. But this, this is neon colors. They do not just pop, they jump out of the screen and slap your face until it hurts.
I was using mostly presets, whcih could stack and did not hesitate stacking them. Contrast up, vibrance up, clarity up. All those things that make a photo "pop".  Not always wrong in my opinion, I do like the tail of the airplane, the brightness of the red and blue there. Which screams for a local edit. I of course did none of my edits local, all were applied all over the photo.
I was not happy with the grey sky, so, up goes the blue saturation. Totally ignoring all the distractions on the photo.

It goes without saying that the first photo in this article (the later edit), is much better. The first thing I did there was to remove a lot distracting stuff in the foreground. In many photos less is more. The photo was not to show how many red-white poles there are, the photo was about the airplane and how it moves over the runways.
I kept the colors much more as they were, making them pop a bit is mostly done by curves adjustment layers in Photoshop. With masks to keep them limited to where I feel they should be applied. The colors of the tail also pop more, because the background is way less vibrant. A much easier and more natural way to have parts stand out.
Big parts of the white on the plane were blown out in the first edit, I learned to keep an eye on the histogram and kept that under control, so there is still some detail on the airplanes lighter areas.
The sky, well, I still did not like that. But making it cyan is surely no improvement at all. In this case I did replace it. Not with a bright blue sky. The original is gray and subdued. So I picked a gray sky with a little bit of lower cloudes. I did dodge the top of the clouds, to give those a bit more contrast with those highlights.
Midtone contrast was added to just the plane, to sharpen the letters and windows on it. Because the letters were not so brightened as in the first edit, it comes out much sharper as the contrast is higher.

All is great now, right?

No, most definitely not. Even if it helps me see that I like making photos, but that I like processing them even more. I think that area has improved much more than the photo-making skills. The newly edited photo is still not an awesome photo. Given how little I invest in really making better photos, I am certain that my photos are never going to be the main piece in a gallery.
But this comparison does help me put my current photos in perspective. My current photos are in general a lot better than this shot.  Just as I am no longer blindly raising contrast and saturation. So, I am pretty happy to actually see my improvement. And I am fine with the slow pace it is improving. It's only my hobby, I do not make money out of it. Although... one of the photos I shot on that vacation has sold three times in Adobe stock. Earning me not even 2 dollar.

If you're reading this blog, I can safely assume you're not a professional with 30 years of experience. Most likely you're more like me. Clawing your way forward to become a little better. With perhaps the same questions I sometimes have. Like: why don't I improve and make great shots? If you do, go back to your early photos from the moment you thought you wanted to look more seriously into photography. You might be surprised about the progress you made. And if so: join me in celebration and get yourself a nice drink or food, or other gift. Or go overboard and buy yourself that great camera. I would like a Nikon Z7.😀

Posted by Andre Speelmans at 7:47 AM